Village ordinance number five dealt with liquor licenses and the regulation of liquor sales -- whether for medicinal, mechanical, sacramental, chemical, or "any" purpose. The rules were carefully set, but early in 1910, the Women's Christian Temperance Union lodged two complaints that the law wasn't being enforced rigidly enough.

Meanwhile, Marshal King stepped down from his post in June, 1910, and Ray Wells was hired as marshal and street commissioner for $50 per month. In September, 1910, he billed the village for repairs, two padlocks, and fly killer.

C. A. Hepke was appointed marshal in November, 1910, taking on full duty Saturday nights and being subject to call at all times.

Even so, there didn't seem to be much need for a local peace officer, because the village board dispensed with the office of town marshal in January, 1911.

Six years later the post was reinstated, and T. F. Swan was hired at $60 a month. He was succeeded in office by William Cropley and John Dietz. 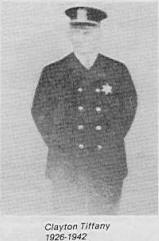 Tiffany evidently impressed the townsfolk as his predecessors had not, for the village residents raised money to buy him a police uniform. They also gave him a reward for apprehending car thieves.

Marshal Tiffany was authorized to arrest horseback riders in Diamond Lake, instructed to keep ball-playing off the streets, and given authorization to purchase eight police clubs. 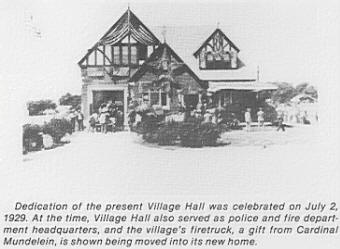 Also during the 1920s, village residents voted for a $36,000 bond issue to build a new village hall. Dedication ceremonies were held July 2, 1929, and Samuel Insull delivered the main address.

In 1940, Mundelein's population was 1,100, still small enough for a one-man police force. In fact, when Clayton Tiffany resigned as police chief in 1942, his replacement, Jesse Shields, was given four other jobs as well. In addition to being chief of police, Shields was named chief air raid warden, collector of water bills and licenses, assistant to John Dietz (then Head of the Street Department), and part-time janitor at Village Hall, all for $160 a month (although the village did purchase Shields' uniform and gun). 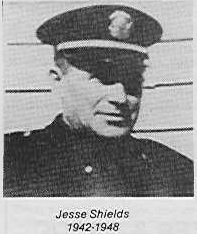 There were no police radios at this time. When Shields was out on patrol, he would look to see whether his wife had turned on the porch light at his home (located on Park Avenue). Wallace Reidel, who served on the village board during the 1940's, would also turn the porch light on at his house on Oakdale St., in case Shields was patrolling the south end of the Village. When Shields saw that the lights were on, he would stop in and ask about the report that had been called in. Reidel would act as Shield's replacement on Wednesdays (the only day Shields had off during the week).

The village clerk would answer police calls during the day. Whoever was on patrol during this time would stop in at the village hall frequently to check for any messages or calls that may have been made, requiring police action.

A police department was established by ordinance number 301 in June, 1943, but it wasn't until two years later that extra men were hired to patrol on Fridays, Saturdays and Sundays in the summer, and a relief man to work one day a week throughout the year at 90 cents an hour. 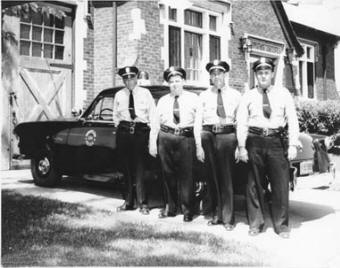 In 1946, Shields was reappointed chief, and was so busy that the board gave him only one other job -- that of Superintendent of Public Works. He was still the only full-time police officer. 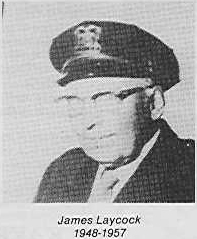 When Shields died in 1948, he was replaced by James Laycock.

Wallace Reidel, chairman of the police commission, urged the addition of a second officer and Edmond J. LaMagdeleine was hired. 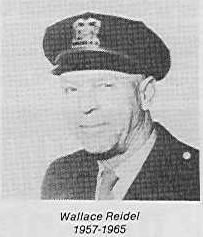 Also in the late 1940s, the village board purchased fingerprinting equipment and a county radio for the lone police car.

In 1964 the Mundelein Police station was built at the corner of Division/Seymour, with an address of 200 N. Seymour. 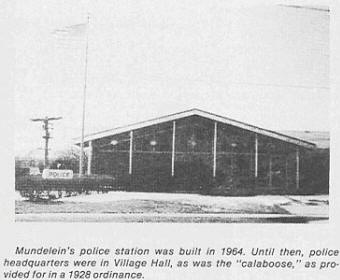 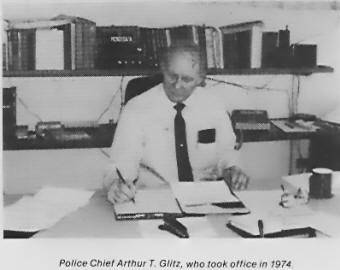 On September 21, 1992, Raymond J. Rose was hired as police chief after a lengthy career, where he had reached the position of Deputy Chief of the Elk Grove Village Police Department. Rose held office until January 31, 2013.

In 2000, construction began on a new police station and was completed in 2002. This new building is located just north of the former police department location, and has access from Lake St. and from Seymour. The new address is 221 North Lake Street. After equipment and personnel had moved into the new building, the former building was demolished and converted into a water retention area. 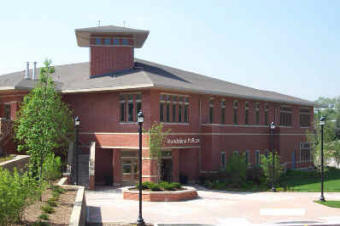 In 2003, the first department flag was designed. This flag incorporates the current squad car decal design with the three, thin, yellow stripes, and the single, thicker, blue stripe. 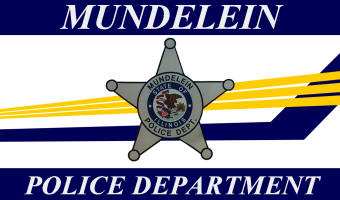 On February 1, 2013 Eric Guenther was promoted to Police Chief, and continues to hold the office. 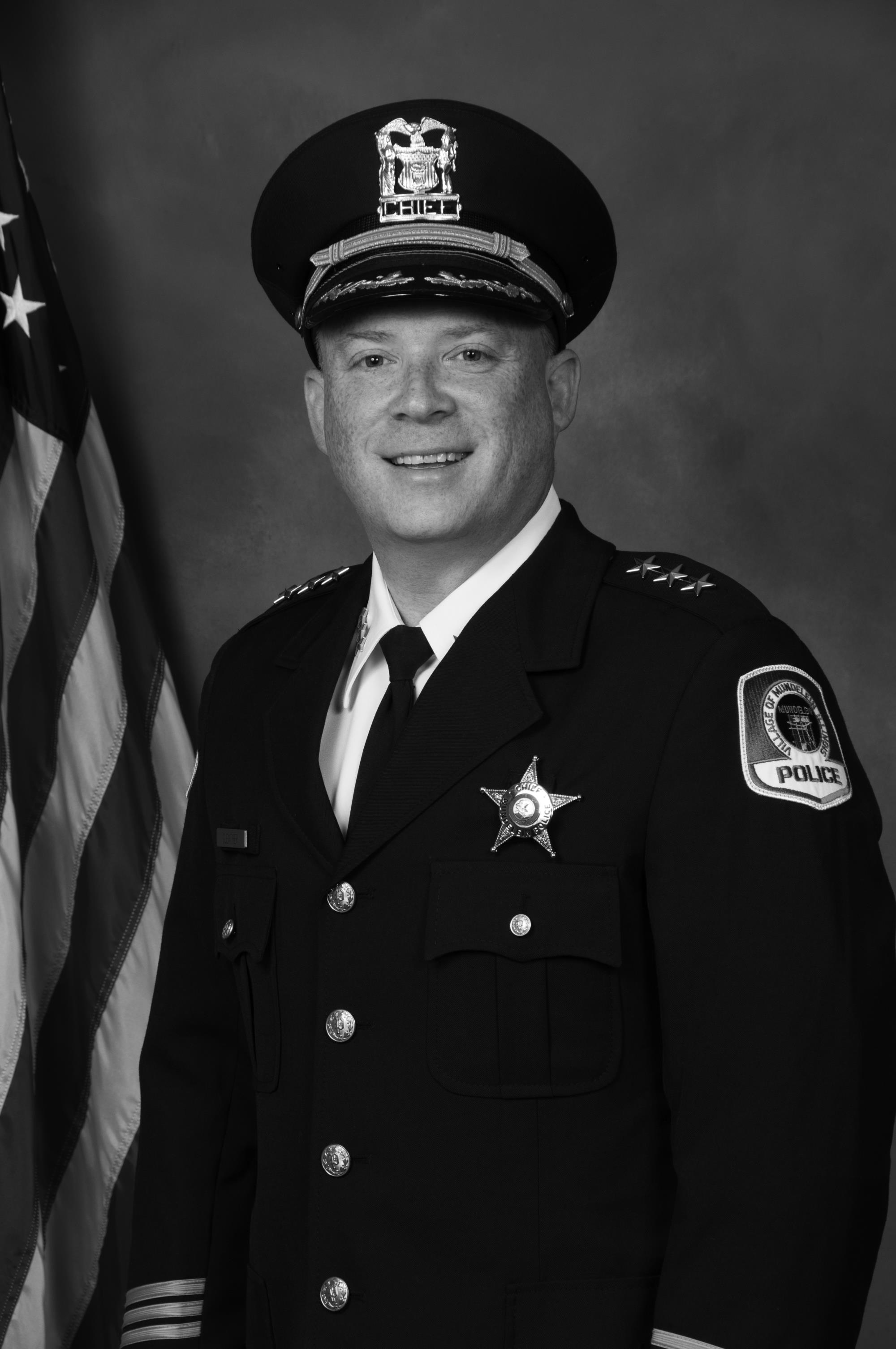 Shortly after July 12, 1909, the village faced its first legal troubles. J.W. Cooper sued for damages when he and his horse and buggy were blown off a bridge and into the outlet of Diamond Lake. Fortunately, the suit was dropped.

The State Bank of Mundelein, established in 1916, kept its doors open during the Depression, although little business was transacted. Even so, the bank was an inviting target for robbers--three times.

At 6:45 p.m. on the night of December 6, 1930, five heavily armed bandits drove up to the bank. One remained at the wheel of the car, three entered the bank, and one stationed himself as a lookout on the sidewalk.

Milton C. Mott, cashier; S. E. Worthen, teller; Leo Dorfier, clerk and Leo Tekampe, a customer, in the bank at the time, were ordered into the vault. Worthen was forced to open the safe and hand over $3,223.

Meanwhile, Joel Chandler, bringing receipts from his father's hardware store to the bank, was also held at gunpoint.

John L. Jarrett, driving past the bank, was stopped by the lookout and ordered into the bandits' car. Instead, he turned and ran to notify Police Chief Clayton Tiffany. Tiffany rushed to the bank with a squad of deputies, but the bandits had already fled in a "high-powered" car.

Four men committed the second robbery. They began by holding the Mott family prisoner in their own home overnight on Thursday, April 12,1931. During the night, the bandits talked about the holdup that had taken place four months earlier.

Early on the morning of April 13, two of the robbers stood guard over Mrs. Mott and her two sons at the Mott residence, while the other two took the cashier in his own car to the bank. The robbers forced Mott to open the front door, and then waited until the time lock on the vault opened at 7a.m. This time they made off with $10,000.

The Mott family was held hostage a second time the following January, when the same four-man gang returned to their home, woke them, and took them all to the bank to wait until the vault could be opened.

The gang took $2,700 and young Paul Mott with them as hostage. After a wild ride through Mundelein and Wauconda, Paul was released.

Three of the four bandits were caught that May and sentenced to prison for larceny.

By that time, "burglar-proof" equipment, including bulletproof glass and steel lining for all partitions, a "loud-sounding gong, guaranteed to be heard all over the village," and a silent alarm system, had been installed in the bank. In addition, revolvers were placed at each teller's station in the thrice-burgled bank.

After the federal "bank holidays," the bank reopened in 1937 as the First National Bank of Mundelein, one of the first to open under the new federal reserve system.